In this final event to mark the 75th anniversary of VJ Day, Joanna Lumley is joined by a host of stars to celebrate and commemorate the conclusion of the Second World War. Hugh Bonneville, Sheridan Smith, Paterson Joseph, Sir Bryn Terfel, Sir Willard White and Nicola Roberts pay tribute to those who served in the campaigns in the Far East. Descendants and members of the military give thanks to the veterans of the Second World War in a spectacular event on Horse Guards Parade, London. 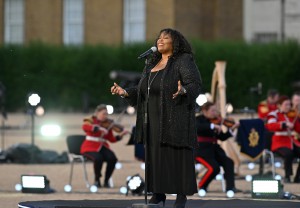