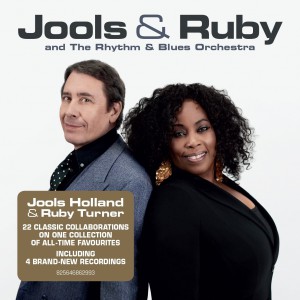 We are very excited to announce a brand new album released 4th December from Jools Holland & Ruby Turner. A collaboration with the astoundingly soulful Ruby Turner, the 22-track release will feature a selection of the duo’s favourite songs performed together – in addition to a number of newly recorded tracks. For more information on track-listing and to order, click here. JOOLS & RUBY

The album features a number of new recordings including Peace In The Valley and Same Old Heart plus brand new compositions Pray Have Mercy, co-written by Jools & Ruby, and Christmas Song with the music written by Jools to accompany the poem by Wendy Cope. Additional tracks include airwaves favourites The Informer, Jumpin’ In The Morning, and This Train.

Jools Holland and Ruby Turner first met 22 years ago when Jools was looking for singers to join his big band. Ruby’s incredible voice matched her big personality and the two soon became dear friends. colors dom whois Describing Ruby as the sister he never had, Jools even invited the singer to perform at his wedding. The duo have gone on to write and record music together and travelled the world with tours alongside the much-loved Rhythm & Blues Orchestra.

You can buy Jools & Ruby here.